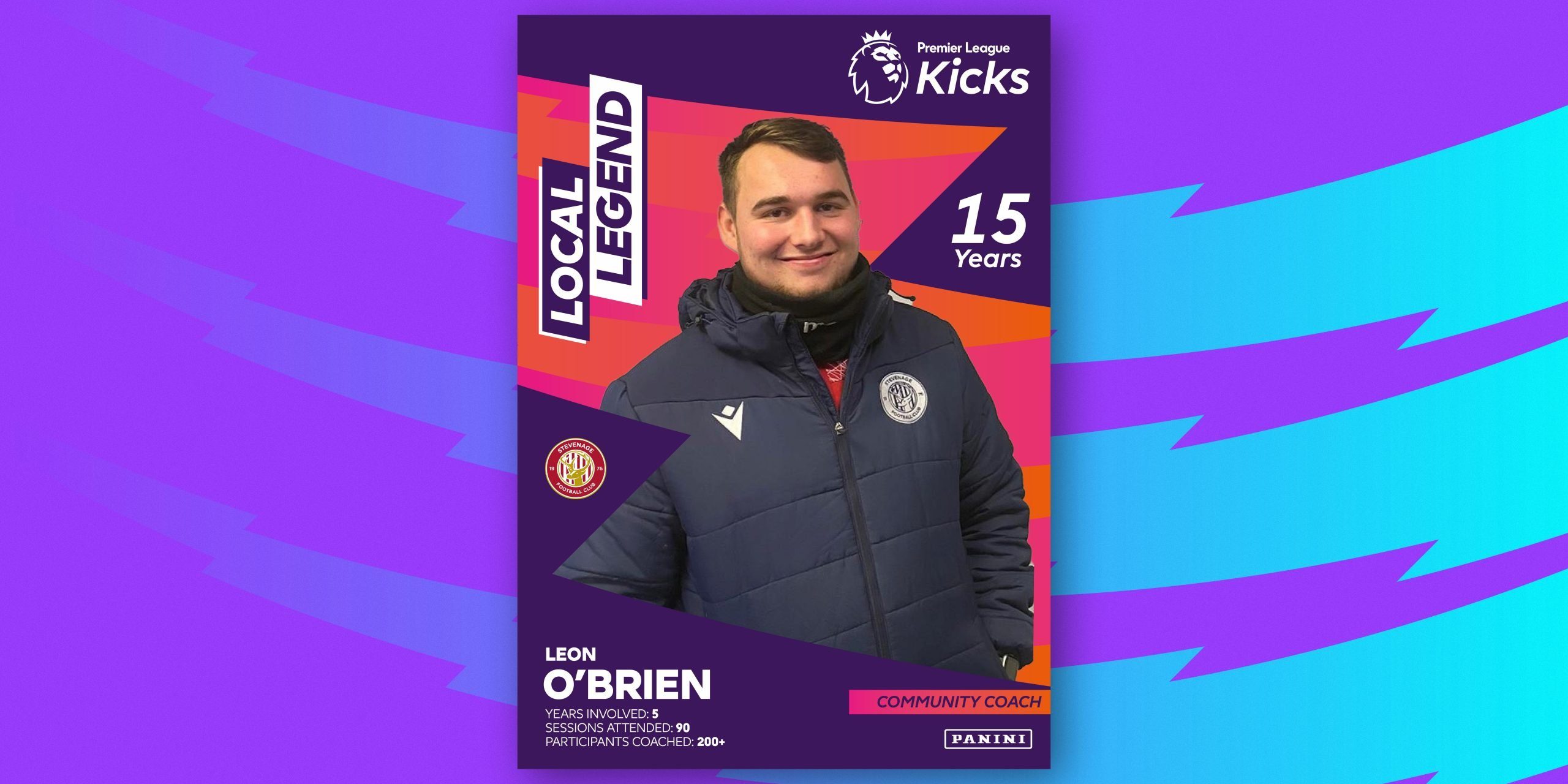 The Premier League is celebrating 15 years of its flagship community programme. Premier League Kicks has supported hundreds of thousands of young people to achieve their potential and improve their wellbeing through free weekly football sessions and educational workshops.

Premier League Kicks began in the 2006/07 season in partnership with the Metropolitan Police, with the aim of involving and supporting young people in regular, positive and fun activity, whilst helping to create stronger, safer, more inclusive communities.

As part of the 15-year celebrations, clubs have nominated a Premier League Kicks ‘Local Legend’ – somebody who has taken part in, volunteered or worked on the programme and has inspired others through their dedication, work ethic and own personal development. One person who has benefitted from their involvement is Leon O’Brien, of Stevenage St Nicholas ward, who has been named as a Premier League Kicks “Local Legend” by Stevenage FC Foundation.

Leon, 20, was chosen as Stevenage FC Foundation’s Premier League Kicks Local Legend, as the programme inspired him to pursue his goals of becoming a coach and enabling young people to reach their potential. Leon took the opportunity to become an apprentice with the Foundation and helped with various events. He also took part in NCS, which has helped him to establish himself as a contracted member of staff in the Foundation as a community coach. Leon has attended over 90 sessions varying from the normal football activities to the various workshops held at our venues. He has volunteered and worked on over 100 sessions and engaged with over 200 young people in the 5 years he’s been involved with the programme.

“Being a staff member on these sessions has given me a platform to inspire and positively impact the lives of others and support them in making good choices. The skills I have developed through Kicks have also enabled me to support those in my personal life”

The Stevenage FC Foundation began its Premier League Kicks delivery in 2018 and since then has hosted 300+ Kicks sessions and engaged a total of 1000 participants. To date, the Premier League has invested almost £66 million in Kicks and in the year ahead an estimated 80,000 young people will take part in the programme. Since it began, more than 440,000 young people have participated in football and multi-sport sessions held at community venues across England and Wales. The programme started with four pilot clubs and is now run across 936 venues by 90 Premier League, English Football League and National League sides – all funded by the Premier League.

“Legend is a word you hear a lot in football, but legends aren’t just created in stadiums. The coaches, mentors, volunteers and participants who are fulfilling their potential thanks to these weekly sessions all deserve to be called legends”

“For 15 years Premier League Kicks has been using the universal language of football to bring communities together and inspire a new generation of young people, providing positive role models who can give them belief and can help to steer them on the right path in life”.

As well as providing young people with access to free football and sports activities, Premier League Kicks offers mentoring, life skills advice and access to opportunities like volunteering to help aid their development.

“We are proud of the incredible impact Kicks has had on communities up and down the country over the past 15 years. As we mark the anniversary, this is an opportunity to celebrate the local legends who have helped make Premier League Kicks what it is”

“The success of the programme would not have been possible without the hard work and passion of club staff, coaches and volunteers working alongside young people at Kicks sessions, week in, week out”.

Clubs also run workshops on a variety of social issues, enabling young people to openly discuss topics that affect them, like equality, diversity and inclusion and combatting youth violence and knife crime. The programme also sees clubs work with 36 territorial police forces throughout the country – with regular sessions taking place in disadvantaged areas.

Visit the Premier League website for more information about the Kicks programme.

Boro Fan To Tackle Marathon For The Foundation
May 24, 2022

You can find our Soccer Camps in #Letchworth , #Hitchin & #Stevenage!

The perfect way to make new friends and learn new skills in a fun and safe environment! ⚽️

We’re looking for a Kicks sessional coach to join the Foundation and help us create active, healthy and positive lives in our community.

Deadline for applications is Tuesday 31st May 🙌

Huge shoutout to @FarleyGinge who is running the @LondonMarathon this October to raise awareness and funds for our work here at the Foundation.

Find out more about Matt's challenge and how to support him here - https://bit.ly/FarleyRun

This website uses cookies to improve your experience while you navigate through the website. Out of these, the cookies that are categorized as necessary are stored on your browser as they are essential for the working of basic functionalities of the website. We also use third-party cookies that help us analyze and understand how you use this website. These cookies will be stored in your browser only with your consent. You also have the option to opt-out of these cookies. But opting out of some of these cookies may affect your browsing experience.
Necessary Always Enabled
Necessary cookies are absolutely essential for the website to function properly. This category only includes cookies that ensures basic functionalities and security features of the website. These cookies do not store any personal information.
Non-necessary
Any cookies that may not be particularly necessary for the website to function and is used specifically to collect user personal data via analytics, ads, other embedded contents are termed as non-necessary cookies. It is mandatory to procure user consent prior to running these cookies on your website.
SAVE & ACCEPT