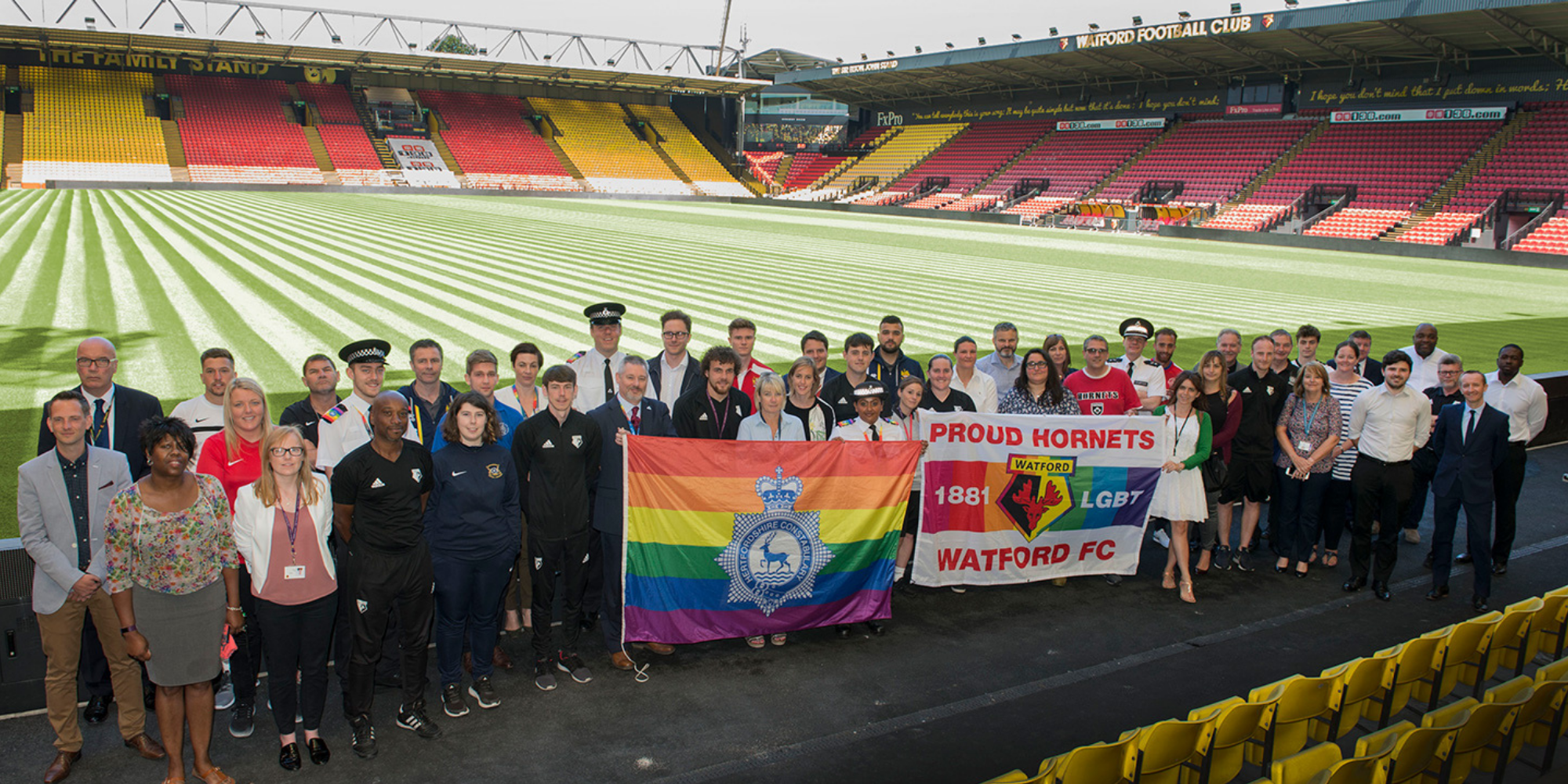 In the run up to the 2018 World Cup, Hertfordshire Constabulary and the Hertfordshire Football Association teamed up to survey more than 400 of the county’s football fans on their attitudes to gay and lesbian players and experiences of homophobia in the game.

The results of the survey were revealed today (Monday, June 11th) at an event held at Watford Football Club, Vicarage Road in Watford.

Whilst the survey revealed 86 per cent of respondents agreed they would feel very comfortable if their favourite club signed a new gay player and 81 per cent disagreed that homophobic chanting at a match is acceptable, 45 per cent had heard homophobic abuse at a football match within the last three years.

Ten per cent felt having a gay player would make other team members feel uncomfortable and another 10 per cent believed that gay professional footballers should keep their sexuality to themselves. In addition to this 19 per cent disagreed that gay football players should come out to help others do the same. The survey also revealed that whilst 58 per cent of fans would feel comfortable if their favourite club signed a new player that was transgender, 14 per cent would feel uncomfortable.

In terms of how football clubs and police should respond to homophobia in the game and the reporting of offences, 61 per cent of fans agreed football clubs should do more to educate fans about homophobia and 20 per cent stated they would not feel comfortable to report the offence if they became a victim at a match. Ninety-four per cent also felt that football clubs and police should take action to tackle homophobic abuse by either arresting offenders, removing and banning them from grounds, giving them strong words of words of advice and referring them to the police.

As a result of the survey findings, Hertfordshire Constabulary and the Hertfordshire FA have pledged to work together to take a permanent stance against homophobia in the game and permanently make it a thing of the past. The organisations will now work together to create Third Party Reporting Centres in each of the football clubs in the county. These centres will enable victims of any form of hate crime*, including homophobia, to report offences immediately without having to talk directly to police if they don’t feel comfortable.

“During the time I have been involved in football in the county I have frequently had vile homophobic abuse directed at me and players I have coached. I therefore welcome Hertfordshire Constabulary and the Hertfordshire FA undertaking this research and shining a spot light on the real issues of homophobia in the game. It is clear real discrimination still exists, but as a result of this partnership working I feel the future is brighter for LGBT+ players, coaches and all those involved in football in Hertfordshire.”

“Whilst our survey has revealed some positive attitudes to having gay, lesbian and transgender players in the game – and to challenging homophobia in football – the results also demonstrate this prejudice still exists.

“Additionally not only are there still currently no openly gay male players in English football, even the Football Supporters Federation has recently warned LGBT+ supporters to not openly display their sexuality if they are attending the World Cup**. Therefore clearly the police and the country’s footballing community need to do more to change this.

“We are keen to reach a stage where homophobia in football is a thing of the past and that fans and players from the LGBT+ community can attend and play matches without fear of being their true selves. To achieve this we will continue to work with the Hertfordshire FA to get the message across that homophobia in football is unacceptable and considered a hate crime which should either be reported to police, the Football Association, your local club or via the ‘Kick it Out’ app.”

“We are excited to be working alongside Hertfordshire Constabulary again to tackle homophobia, biphobia and transphobia, so that everyone can feel able to play, coach, officiate, administer or be involved in any role in football.  An individual’s sexual orientation or gender identity should never be a barrier to participating in our national sport.

“In partnership with Hertfordshire’s football community, we want to stamp out LGBT+ discrimination in football throughout the county and we strongly encourage those who experience it to report incidents to police, the Hertfordshire FA or through the online ‘Kick It Out’ app.”

“It has been great to attend another event to promote an inclusive culture within football across Hertfordshire. After the original event at The Lamex Stadium a couple of years ago, it is great to hear from campaigners and key organisations that are driving this forward and we’re delighted to be playing our part. The aim, of course, is to make the game welcoming and accessible to anyone and days like today go a long way in highlighting how important this work is.”

“While the results of this survey show a positive attitude from the public when it comes to tackling homophobia in football, we still have a way to go when it comes to educating some fans about homophobia. I am very pleased to see the Constabulary working with the Herts FA on this important matter.

“My Community Safety and Criminal Justice Plan is called ‘Everybody’s Business’, and we are all responsible for ensuring people are treated justly for being who they are and what they believe in.”

Hate crime is any criminal offence perceived by the victim or any other person as being motivated by prejudice or hate, based on a person’s sexual orientation, transgender identity, race, religion, or disability.  Hate crime victims may experience physical assault, people swearing or making abusive remarks, spitting, insulting gestures or people doing things that frighten, intimidate and cause distress.

If any of the behavior described above is directed towards players or fans and is perceived as being based on a person’s sexual orientation, transgender identity, race, religion, or disability it will be dealt with robustly by police.  On conviction, the element of prejudice or hate will be taken into account and an enhanced sentence can be given by the court.

Victims and witnesses can report incidents to police without fear via the non-emergency number 101, online at www.herts.police.uk/Report or 999 if a crime is on-going. Victims can be reassured that they will be taken seriously and treated with sensitivity.  However if people do not feel comfortable speaking directly to police, hate crime can also be reported online through the True Vision website www.report-it.org.uk which all police forces in England, Northern Ireland and Wales are signed up to.  The online report will then be forwarded to the relevant local police force.

‘Kick it Out’, football’s equality and inclusion organisation which is funded by the Football Association, the Professional Footballers’ Association, the Premier League and the Football League has created its own reporting app which can be downloaded onto any smart phone.  The app allows users to confidentially report incidents they may see, hear or witness at a match and allows users to attach video and audio evidence.  The report is then forwarded to the FA to investigate further.  Discriminatory behavior can also be reported to via an online form on the Kick it Out website www.kickitout.org

Hertfordshire Constabulary has trained a number of officers and staff as LGBT+ Liaison Officers. Though they are not all LGBT themselves (many are) they are there to assist both victims and investigators of crimes. If you are a victim of any kind of crime and feel that you would be more comfortable talking to an LGBT+ Liaison Officer, just ask in the event of contacting police.

Hertfordshire Constabulary has a team of specially-trained hate crime officers. These dedicated officers offer victims help, support and advice. They can meet victims in a place they feel comfortable and safe, and will explain options available to them. They can also be there for a victim if a statement needs to taken and if the case goes to court. Victims can be confident that they will be treated with respect and in confidence.

Winter Warmer Care Packages Being Offered To Over 70’s In Stevenage
February 4, 2021
Search