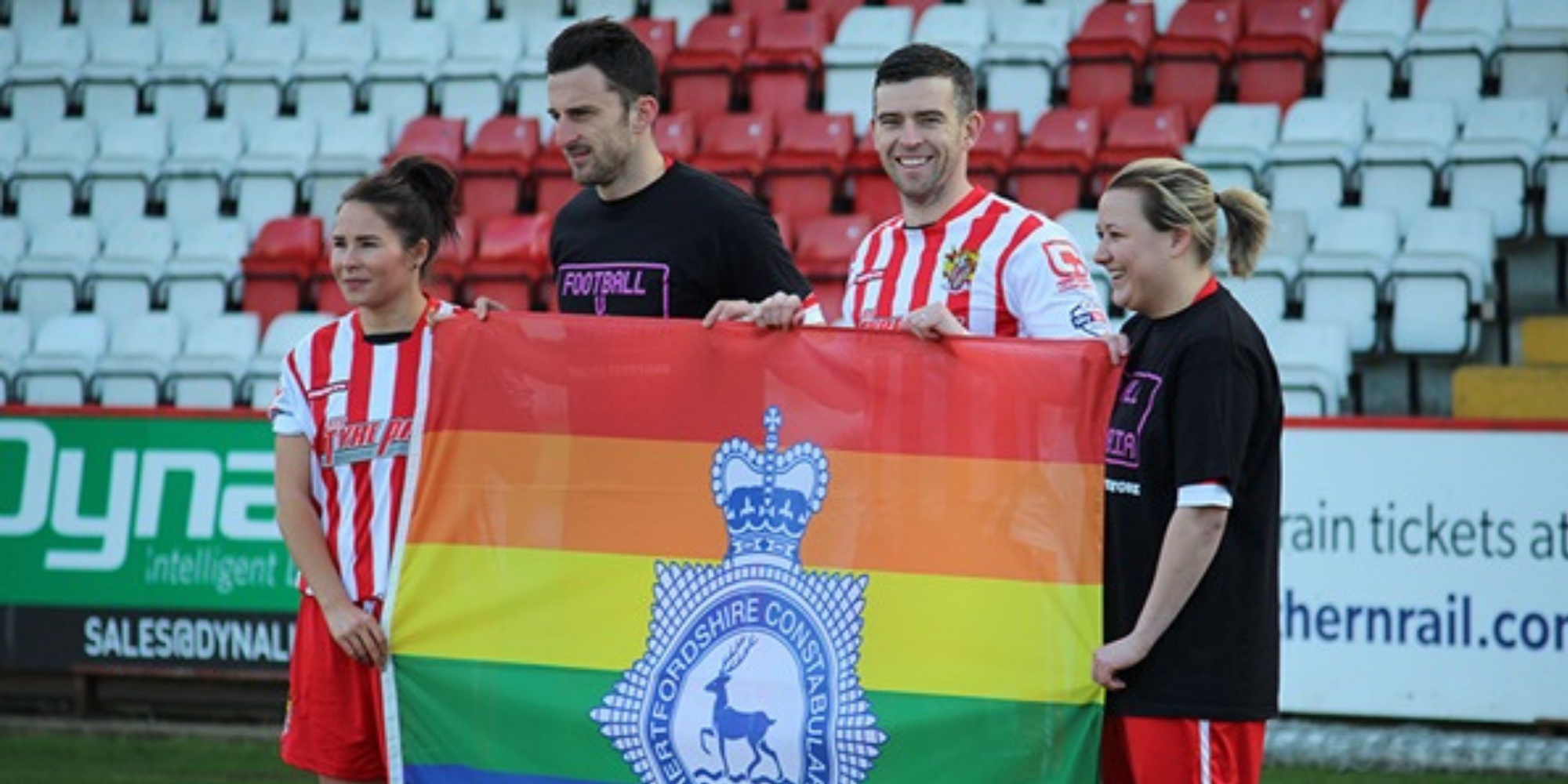 As part of LGBT (Lesbian, Gay, Bi-Sexual and Transexual) History Month, Hertfordshire Constabulary has teamed up with the Hertfordshire Football Association and the county’s football clubs to make a stand against homophobia (including biphobia and transphobia) in football and to encourage the reporting of homophobic incidents – which are hate crimes – to police.

As part of the initiative, representatives from the county’s local football clubs and Hertfordshire Constabulary Veterans football team will wear Stonewall’s* Rainbow Laces in at least one match during February.

Yesterday Stevenage’s Chris Whelpdale and Steven Schumacher were joined by representatives from Stevenage Ladies FC and other county clubs to take part in a photo-shoot at The Lamex Stadium to jointly demonstrate their support for the campaign. To continue to spread the message, posters encouraging fans and players to report homophobic abuse will also be displayed around the football clubs.

Results of a fan survey from Stonewall, looking into anti-gay abuse and the game’s failure to tackle it indicated that:

“We are pleased to be working with the Hertfordshire FA, Hertfordshire Constabulary and fellow football clubs to make a stand against homophobia in football. As an award-winning family club we recognise we have a role to create and ensure a welcoming and comfortable environment for all fans here at The Lamex Stadium, regardless of background. This message of equality is extremely important to us at Stevenage and this is why we’re supporting this initiative.”

“We are delighted to be working with the Hertfordshire FA and the county’s football clubs to be taking this stance against homophobia in the game and raising awareness that this form of abuse is a hate crime which should be reported to police so offenders can be brought to justice.

“It is fantastic that the county’s clubs have agreed to support this just cause by wearing the Rainbow Laces and I hope that this initiative will help us to work towards homophobia in football being a thing of the past in Hertfordshire.

“Everyone has a right to enjoy football without fear of being targeted for who they are or what they believe in.  We hope that the campaign will help to spread this message and make everyone aware that this form of abuse in football, and in any sporting arena, does not have to be put up with and that something can be done about it.”

“It cannot be denied that homophobia, transphobia and biphobia does still exist in our communities, and sadly particularly so in the footballing arena.  I am therefore pleased to see the Constabulary working with the Hertfordshire FA and the county’s local football clubs for such an important cause during LGBT History Month.

“It is unacceptable that people are still being treated unjustly for being who they are or what they believe in.  It does not have to be put up with and I hope that this campaign succeeds in raising awareness that treatment such as this is a hate crime which can be reported and dealt with by police.”

Hertfordshire Constabulary has trained a number of officers and staff as Lesbian and Gay Liaison Officers (LAGLOs). Though they are not all LGBT themselves (many are) they are there to assist both victims and investigators of crimes. If you are a victim of any kind of crime and feel that you would be more comfortable talking to a LAGLO, just ask in the event of contacting police.

Hertfordshire Constabulary has a team of specially-trained hate crime officers. These dedicated officers offer victims help, support and advice. They can meet victims in a place they feel comfortable and safe, and will explain options available to them. They can also be there for a victim if a statement needs to taken and if the case goes to court. Victims can be confident that they will be treated with respect and in confidence.

Victims and witnesses of hate crime can report incidents to police without fear and can be reassured that they will be taken seriously and treated with sensitivity.  However if people do not feel comfortable speaking directly to police, hate crime can also be reported online through the True Vision website www.report-it.org.uk which all police forces in England, Northern Ireland and Wales are signed up to.  The online report will then be forwarded to the relevant local police force.

Congratulations to @JoeGoude for 6 years as our CEO!🏆

Here’s to many more🥂

Today chalks up 6 years for me at @borofoundation, celebrated with a win under the lights at The Lamex last night!

There also info on our Feb half term Soccer Camps that are LIVE NOW! 📖⚽️

This website uses cookies to improve your experience while you navigate through the website. Out of these, the cookies that are categorized as necessary are stored on your browser as they are essential for the working of basic functionalities of the website. We also use third-party cookies that help us analyze and understand how you use this website. These cookies will be stored in your browser only with your consent. You also have the option to opt-out of these cookies. But opting out of some of these cookies may affect your browsing experience.
Necessary Always Enabled
Necessary cookies are absolutely essential for the website to function properly. This category only includes cookies that ensures basic functionalities and security features of the website. These cookies do not store any personal information.
Non-necessary
Any cookies that may not be particularly necessary for the website to function and is used specifically to collect user personal data via analytics, ads, other embedded contents are termed as non-necessary cookies. It is mandatory to procure user consent prior to running these cookies on your website.
SAVE & ACCEPT